~ Screams bellowed out of the exit/ Entrance

~ A few sets were sweet!

~ No scare delivery by actors

As we walked up to a rather blank entrance we were immedietely greeted with screams bellowing from both haunts of absolutely terrorized guests! This continued for the entire time we were in line, though there wasn't much other entertainment.

Upon entering Slaughterhouse Gulch you might quickly realize that you will be living your nightmares coming face to face with very familiar frights! Capturing just about every mainstream horror movie you could imagine this freak house is sure to leave you terrified. Venturing through the haunt a few sets were very nice, but just as many were bland and lacking any major detail.

After an elevator ride from hell with a very creepy guest we are set to learn the back story to the 13th Door. The tale is very developed and Creepy but hard to hear. At last we have a mission, to find the 13th door! Our endeavor through the dimly lit burned hallways included some nicely detailed and realistic hotel rooms. Acting throughout the hotel however was very dull, Characters matched the theme but had little to no dialogue or interaction with us.

Overall the combined length of both haunts was decent, splitting both up with a short wait in line worked well to their advantage to build much needed anticipation. 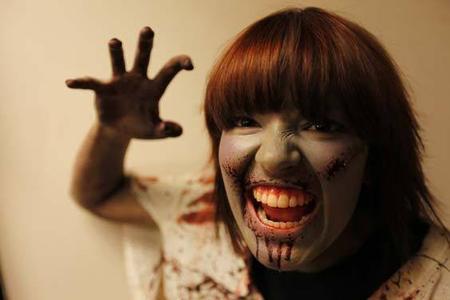