~ Actors were unenthusiastic and did not pursue scares or try to get under your skin at all!

~ There are mirrors in a few spots of this haunt like the mirror maze and infinity well bridge that need clean mirrors in order for the effect to work and the mirrors are very dirty dust and paint all over them making the effects not work well!

This year 13TH Floor has divided their haunt into 3 attractions; Slasher remix, Undead: Abomination, and Cursed: The Ritual. These themes worked out very well for this haunt and gave a reason for just about everyone to feel a little uneasy.

This is what nightmares are made of! Playing on the old slasher films we all know and love these guys ressurrect those memories, twist the characters, and put you face to face with them! This cabin in the woods is packed to the brim with chainsaw wielding psychopaths, bladed demons from your dreams, and victims of years past. Though the cabin looks eerily similar to that of years past this new theme made it work well with the characters in this particular part of the haunt absolutely selling themselves as some of our worst nightmares!

As you descend on the elevator to Undead: Abonination you are supposed to be brought to the labs beneath the surface of River North, but this wasn't made obvious to us at the time. None the less we traveled deep underground and were set to uncover experiments, mutations, and burials that surround the conspiracies and rumors of this now modernized area. Traveling through incredible set after set we truly felt transformed to another time!

The Curse was one of our personal favorite parts all though it is pretty short these ancient walls carry werewolves to the next level! The Ritual takes you back to before the “Feral Moon” awoke these ravenous creatures, when the living and the undead were revived by the act of necromancy of a local “bokor,” a sorcerer or witch. Scenes throughout these unhallowed grounds felt terribly realistic with every inch taken into consideration. These catacombs aren't for the faint of heart! 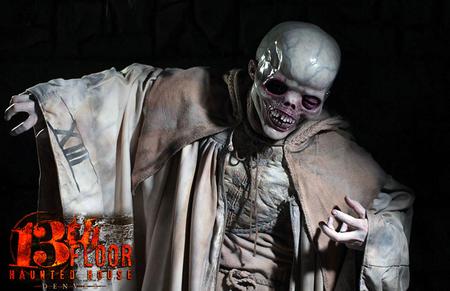