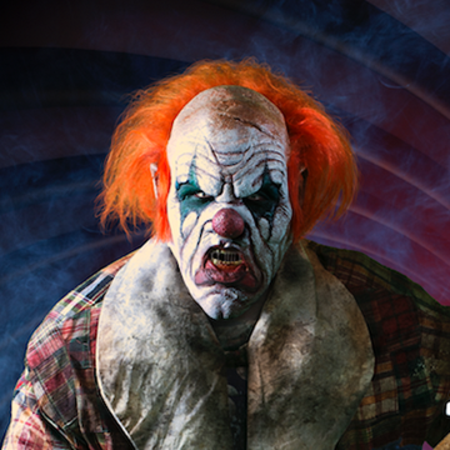 ~ Disorienting first few scenes with an awesome elevator much more realistic than before .

~ We expect a lot more from such a "legendary" attraction

~ Bang for your buck on busy nights general admission $33+$5 parking seems a bit steep to us.

~ Not much going on out front of the haunt just a boring blank warehouse with 1-2 actors milling about.

Dropping right in to an elevator that is actually creepy the first few minutes of this haunt is extremely disorienting. Darkest Dreams is what they call these first few scenes and it does truly feel like you are dropped into a nightmare! Squaring up with Natchmah and her demented creatures isn't for the faint of heart.

Next up is an uneasy and unclear transition to Slaughter. None the less these scenes could be straight out of Stephen King's "IT". Rumor has it that about every 20 years the mystery of an alarming number of murders and missing persons terrorizes the town of Coalfell. The residence are eerily quiet here with a few grunts and growls....was this playing into the story of the town or just unenthusiastic actors?

The final Scenes are Undead: Restless spirits, and they lived up to be much more than restless! They've hidden some talented actors in this area with incredible makeup and costuming. We always love a nice Decaying manor and its undead inhabitants!

Some scenes throughout were simply jaw-dropping like something out of a Hollywood set, and effects rarely seen before hoisting actors from ground level to 5 feet above you in a matter of seconds or flying above you they're sure to make anyone hit the deck! Unfortunately every one of these were met with a random pile of stacked chairs thrown in the corner of a room....our only explanation was this was a quick fix to cover blank space.