City Of The Dead

​~ Every prop is perfectly detailed and lifelike, all animatronics functioned perfectly

~ Lots of fun stuff in line while you wait

~Actors seemed "light" in some areas, scenes felt abandoned, was this how it was supposed to feel? like humans had been run off and zombies were slowly taking over? maybe? but we would've liked to see a few more zombies walking the streets and other areas.

~ The gentleman we would describe as a gatekeeper to the city who told us the rules and let us in said the haunt was going to last 45 minutes, we think he overshot that a bit...We heard multiple groups on the way out say "that's it?" Had the gatekeeper not put the 45 minute long haunt into their heads I doubt they'd be saying that. That being said the city is huge, incredibly intense, and takes a while to get through with plenty to do before and after.

We weren't even out of our car before we were greeted by a character named Harold, I think he's a bum but don't tell him I said that.  He is a perfectly detailed character with much thought put into his character as with many in the City, he really needs a ride to Gypsum if anyone is headed that way.

If you can make your way past the parking lot terrors and are still brave enough to enter this hell hole you are faced with incredibly intense sounds of fright from within. The screams of other victims mixed in with the evil music the city produces is unnerving. Following suit with everything else so far, the line actors inside are sure to make getting to the front door a challenge.

City of the Dead is known for their attention to detail, and they haven't lost their touch. Insane care and a demented sense of creativity have been put into every square inch of the place. The gore, the stenches, the loudness, these guys go all out to make you as uncomfortable as possible, and it's fantastic! Lifelike animatronics truly had us cringing and trying to decipher living from dead. Every scene works perfectly with the city, the school house, barber shop, grungy retirement home, and insane asylum, just to name a few! We can only imagine how many hours have been put into every room here.

Just when you think you've made it out you find yourself in another queue for the Curse of Darkness. Following its predecessor, the amount of detail is unreal...However, the effect is quite different. Feeling your way through hellish darkness only to be faced with, again, intense creatures whose soul purpose is to make your skin crawl and boy does it make one nightmare of a show! 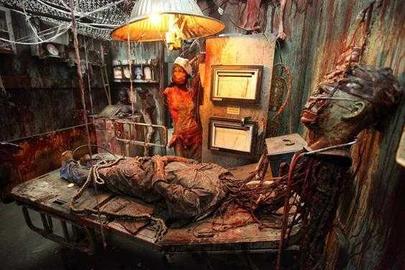