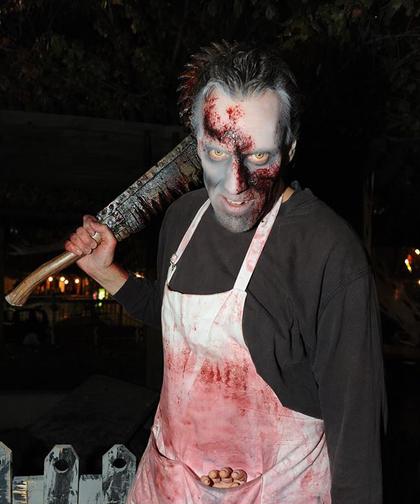 ~ Screams were pouring out of the haunts!

~ Actors were few and far between

~ Scenes and props were blank and lacking any detail

~ Both haunts were too short

~ Elitch Gardens Fright Fest sure does set the scene as you walk into the amusement park! They have actors mingling about along with displays of outhouses, graveyards, and webbed trees. Though the haunts are geared more to a younger audience we still had a bloody good time.

First up was Big Top Freaks a jester driven creep house with plenty of Energy. Creepy Carnies bounced in and out of our bubbles leaving some patrons we had entered with in a frolicking frenzy! Though the clowns had minimal dialogue they played it off well. Our favorite part came immediately after the haunt, a "runway" of sorts was positioned perfectly to enjoy the frantic screams and track star like abilities patrons developed after encountering the saw wielding psycho.

Next stop was Flesh Factory...Escape! A well put together intro to the lab had us teeming for more, but detail also lacked greatly in this haunt. There were very few monsters in the factory but the few that we encountered sure did earn their worth. This haunt was more of a maze which worked to extend our stay in the factory nicely and played well into the "escape."

Overall we had a great time at Fright Fest but we think Elitch Gardens can and should do better when it comes to their Haunted Houses.