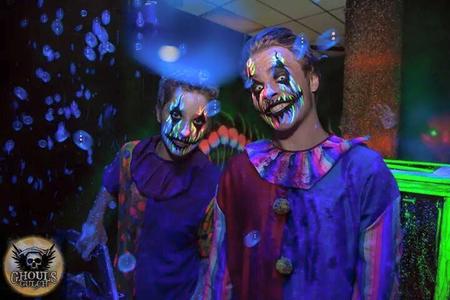 ~ Creative use of space, unconventional "mazing"

~ Open air above our heads, We would prefer to look up and not think about old supermarkets

~ We would like to see some of the actors focus more on scaring and less on their theatrical lines.

As you enter the lobby of this haunt there is plenty to do and see while waiting for your turn to enter. Actors milled about with all sorts of creepy crawlies, giant snakes, and clowns on their shoulders.

Upon entering the Sanitarium were were given a quick briefing on the current procedures and sent in to mingle with the patients...or were we the patients? These folks sure made us feel at home in here, having us play gruesome games and joining them in a smelly shower (and yes, someone dropped the soap) Either way you look at it there is no way to stay compiled after putting on the 3D glasses. literally taken to a whole new world these actors knew exactly how to capture our lack of perception putting everyone on edge with the simplest of scares. This attraction makes great use of space and twirls you back around to a familiar area with minor variance having you think you might have gone crazy, and this doesn't just happen once.

Now we began our descent into the ghouls gulch. Scenes were all relevant to the theme and a forest scene in particular was executed very well with creative props and animatronics  creating a realistic hideaway for the ghouls. Actors in this attraction were very convincing and had their characters perfected! A chicken coop filled with familiar yet devilish children's toys, a hungry goat, and dancing taxidermy are just a few of the thing you will come across in this terrorizing trench.