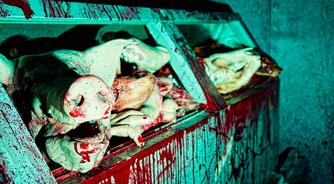 Pros: Awesome effects paired with detailed painting and clever use of 3D paint and scenes, Cool side show.

Cons: Some actors could develop their character more, Could use a few more unique scares.

Notes: Upon entering the complex we were greeted by a very tall funny clown, with lots to share, among a few other characters milling about. A side show with lots of cool oddities, skulls, and creepy crawlies to keep you company before or after the haunts. Sanitarium 3D was shockingly new and exciting not only were the scenes 3D but the actors and their makeup as well! Fun mazes with tormenting actors mixing things up making anyone question their sense of direction. Throughout both haunts Actors were very observant and worked amazingly together to spread messages and work off each other. These haunts had some pretty cool special effects which were perfectly placed. One chair in particular would catch even the hardest a bit off guard. Use of props from a well known local company also impressed us very much even knowing exactly what they do. As individuals, either haunt was a bit short for our liking but together they are a gruesomely perfect length!