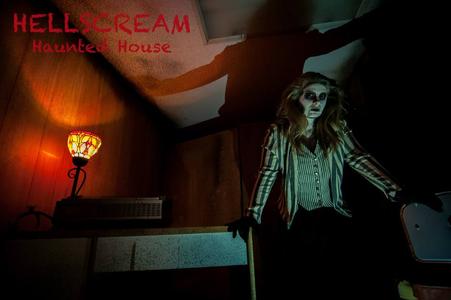 ~ We never wanted it to end!

Nestled in the heart of Colorado Springs though the establishment borders a church this isn't your grandmothers Hell house! This haunt has a crazy twist on traditional themes and boy have they done it again...this place is phenominal!

A lot of haunts try to be "Creepy" to be scary instead of using jump scares. The concept they go for is to get under your skin with acting skills and scenes alone. It's not easy and most actors, we hate to say, cannot accomplish it. Hellscream has absolutely nailed it! The combination of  incredible acting and strangely realistic scenes, mixed with one of a kind special effects and original ideas has done something that not many can do. As you can imagine, going through as many haunts as we do,  it's tough to get us. These guys have managed to give us the willies!

Starting out in a briefing room, you're told the rules of the hallways, follow them closely or you'll end up in the next batch of stew! As you enter the haunt and get all checked in you catch your first glimpse of Hell and man does it look devious! Immaculate scenes unfold before you with realistic animatronics and intense effects. When you enter the creatures dwellings each one has a unique way of making you feel right at home, don't get too close...one of our favorites in particular has a pretty shocking wave! Some creatures, like the pumpkin man, have the ability to roam between the walls and seem to be lurking around just about every corner, this demonous friend is not to be taken lightly.

Moving along you'll find yourself underground in the swamps where all 5 (or 6) of your senses are captured! Making your way past the deep woods monsters is no easy task, ambushing from every angle the creepy crawlies make it apparent that they haven't eaten for years, and you're on the menu tonight!

Climbing out of the basement to the upper floors is a total transformation of worlds. The winding way this floor takes you is truly one of our favorite Scenes out of any haunt in Colorado! Terrible smells and loud noises greet you as the ominous hallway carries you back and forth between every  horrifyingly hellish room! You'd think completing this floor would take you to safety, wrong again.

Traveling back down to the main level you find yourself outside spiraling through caves and mines Littered with anything from Witty clowns to silent gatekeepers. AHH the final stretch all you have to do is survive, easy enough right? Make it through the new western scene, past the hangman, a few of his creeper helpers, and you're home free.....if the twins let you out.