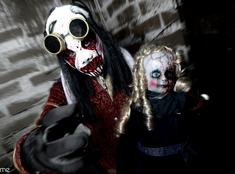 Pros: Awesome entertainment out front, Some actors were sensational, awesome use of water effects

Cons: Spotty acting, a few other scenes could've used a different ground texture (other than carpet and linoleum) and a bit more detail.

Notes: As you arrive at Hellscream you will be greeted by plenty of awesome characters milling about the front of the haunt. From a very tall creepy lady, to one of our favorites "Doug The Digger" a very developed character with some hilarious things to say not to mention his sweet ride; he's got a few tricks up his sleeve. Dragged through 3 different levels this haunt is the perfect length and definitely a bang for your buck capturing you in scenes from a dining room to graveyard every gruesome scene is tied together amazingly! Perfectly placed, very realistic hellish props had everyone guessing which would release terror! Most actors were on their A+ game, attacking from all levels patrons were sent shrieking out of scenes! Just when you think its all over patrons encounter "Stitches" the clown! Stitches had such perfect timing and a perfect spot nestled in with dozens of props he actually startled one of our critics! Stitches isn't done yet he has an entire maze to terrorize and break down even the Purest of minds!