~ Natural ambiance of the property

~ We felt rushed through the haunt

~ We miss the detailed skits while riding in on the trailer

~ Actors didn't have much to say after their initial lines

~ Lots of actors "booing" or "rawring"

Notes: Nothing quite paints a picture for a perfect haunted attraction like a corn field in the middle of nowhere! This is where legends are made!

As we hop onto a trailer  the tractor begins to pull us out into the field. A quick stop in the barn for a briefing of the rules and we're off! The tractor in years past has stopped at other side shows and skits along the way but this year the sideshows were neglected and also looked rundown and broken, this dissapointed us because it used to be an awesome show! Once you get over the boring ride in we are basically dropped and left for dead in the middle of a corn field, Which would sure get the juices flowing for just about any patron!

As we enter the haunt scenes looked good and were very realistic, the story line was developed but poor quality props stuck out to me all over the place. With a bit of time and creativity these props could turn around the haunt.  As we walked through the town actors were not very engaging and lacked improv.

What really turned the experience around at the haunt for us was the Zombie Paintball Massacre! We sat in front of our guns and were told to fire at will once we reached the zombie hunting grounds, this was way too much fun! Thoughts of conserving ammo left the mind and the thrill took over sending rapid fire balls splattering all over the zombies!

Terror In The Corn/ Zombie Paintball 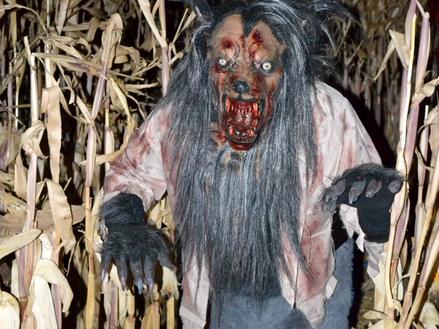