~ The room escape was nothing short of awesome!

~ Actors in Asylum are very convincing and have nice costumes/ makeups

~ We would like to see more than one line actor in the queue line. A facade or a scene out front can go a long way.

The scene upon arrival at The Asylum is nothing short of eerie. Distant screams greet you as you approach the line. Once there however, you are left in suspense and anticipation as all you hear is a chainsaw and the fear of it's victims crashing towards you. A few more line actors and the wait would be a bit less gruesome.
Soon after you'll find yourself entering a brain busting room! Be sure to have your thinking cap on for this one. After you make it out it's deeper into the pits you go. Though most scenes were excellently executed we noticed a few blank walls and inconsistencies with actors. Spontaneous scares are waiting for you as you delve deeper into the apocalypse of this world, so tread carefully.
At the heart of the haunt you'll find the actual Asylum were you're faced with a doorman who is more than convincing. Don't talk back or it's hell to pay. Once inside the Asylum it's total sensory disorientation. Doctors and patients will fight to keep more than your company. Flesh is a common currency among the dwellers of this establishment. The exit will sneak up on you faster than you expect, you can run but they'll only chase you. Once you're out have you truly escaped? There is only one way to find out... 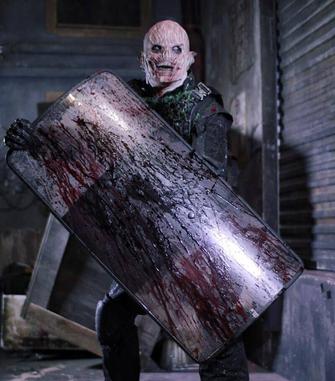