Pros:
~ great quick witted line actors,
~ Awesome escape room
~ Actor crowd and group control was perfect!
Cons:
~ scare timing off
~ blank hallways
Notes:
The asylum this year has broke their haunt into 3 all new attractions Post Mortem: the escape,  Primitive fear: Anarchy, and  Ridgegate: the deranged. These 3 attractions are a stunning way to break up this nicely sized haunt
Post Mortem: The escape sends you into an autopsy room of a resident lost to disease where you quickly realize that you are trapped! Desperately, you must work with your group to uncover the clues and make your escape. You have only a short time before the chamber begins filling with the sedation gas. We thought we had this all figured out from last year...not quite, its a little different this year! You don’t want to be trapped there in an unconscious state...or you may be the next one on the table!
Disoriented after your escape victims are sent straight inot Primitive Fear: The Anarchy. This appears to be a post appocoliptic scene with zombies running about. Apparently this is supposed to be a gateway to civilization from the asylum but who knows, the theme was unclear to us in here. some cool foggy effects and a sweet streets scene are in place here but many props seemed out of place and unrelated. A masked duo is supposed to run these streets, but they must've made it outside because they were entertaining us in line while we waited to enter the haunt. None the less this place is creepy and beautifully detailed to the grade of a Hollywood set!
After a short wait (plenty to look at and be entertained by during the wait) we are set to enter what we know as the Asylum but those who inhabit these gruesome walls simply refer to it as “Ridgegate”: electroshock treatments, bloodletting, surgery viewings for family members, grotesque lobotomies, and inhuman isolation guaranteed to drive even the most stable of residents over the edge. It is said that one could not tell the residents from the staff, except for the straightjackets, that some have weaseled their way out of! Most actors in the Asylum are so good they've taken this much further than just a job, which is exactly what we want! Bawling their eyes out, skreetching for help, and nearly banging the walls down these patients nailed it! 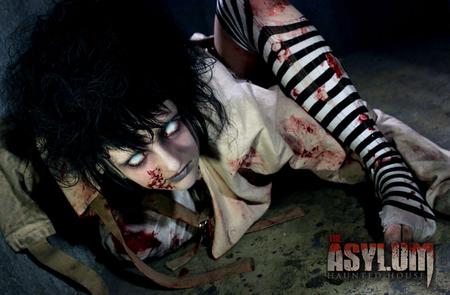